How it all began … 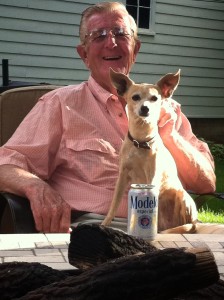 Over the last couple of weeks I’ve had a several people look ask me, “Is everything ok?” “What’s going on?” So on and so forth. I thought it would be good to share the origins of my current mind-set that have actually been in motion for a bit over three years.

My dad in his new wife decided to spend the summer of 2010 traveling the West in their truck and trailer. During their travels they came to  Ogden, Utah to visit – twice. During each of their stays their stories of the road and their answers to my questions regarding their experience rattling around my mind. It seemed like such a carefree easy manner in which to live your life.

As my dad and I sat at a campground on the shores of the Great Salt Lake on a cool summer evening with a brilliant red sunset bouncing off of the Wasatch Mountains  we chatted about the experiences he had for a large portion of the summer. It seemed to me that he was happier that I ever remembered him being.  It was a lovely night and I couldn’t help but think that in their travels my dad, and his wife, had experienced something as lovely nearly every day.

“Dad,” I began my question, “why do you have to wait until you’re 65 to live in a manner that is obviously so enjoyable?” My dad’s expression changed to an almost childlike giddiness and he replied. “You don’t.”

On my 10 mile drive home I thought about the campground hosts who were living in their at the campground for the summer. Rather than residing in their home located eight miles way, they  chose to live on the shores of the Great Salt Lake next to a freeway instead of the house that many years prior had represent all of their hopes and dreams for the future. I pondered, “How could that be?” It was on that drive I actually began to formulate a plan that would allow me to make a dramatic change in my own lifestyle.

As I began to consider this plan, I really began to dissect my current situation. In order to get a feel for where I’m coming from and to contrast it with where I am going, allow me to spend a few minutes describing where I found myself at the beginning of this journey.

The best way I can describe where I was in my life is to say that I was doing all the things that I thought I should. Granted being a single guy with no children allowed me options that most 44-year-old guys might not get to consider. Yet upon reflection I would have to say my lifestyle wasn’t all that unpredictable. I would have to say I lived like many single guys would. I owned a motorcycle, a Porsche, a truck, jet skis and a 3500 square-foot home. My home had more than enough room for me and my dog Charlie. We had two rooms with nothing in them. Yet somehow I managed to justify the need for six flat-screen television sets throughout the house. Charlie didn’t even watch TV. I was definitely a consumer. I like to buy things and I liked to buy the best. The person who came up with the name Best Buy definitely had me in mind.

Before I get too deep into this I want to be clear that this isn’t the story about someone who woke up one day and looked around and saw all the things they had yet was still unhappy. I’m not even sure that this is a story about happiness. I can honestly say that I enjoyed having things. I enjoyed being able to go into six different rooms and watch TV. I enjoy movies on demand in the theater room. Driving a Porsche is fun. Jet skiing on the lake after work was quite enjoyable. Cooking dinner on a Wolf commercial grade stove is a much better experience than using a hot plate. I’m not here to say that having things or having toys is a bad thing.

What I’m examining is the difference in lifestyle that your choices bring when you decide to let go of things. I’ll never tell one that their possessions are bad, I’m a firm believer that there’s nothing inherently good or bad about anything – especially physical objects. It’s our reaction to those items and how we let them affect us in our daily lives that truly make the difference.

For instance if one chooses to simplify their life chances are they are not going to get rid of all  possessions. They are going to hold on to something. Whether it be  clothing, a book, toothbrush or car, they are keeping something. That is their choice. If someone chose to simplify to the point of living in 1000 ft.² home over a 5000 ft.² home or someone else decides to live in a 500 square-foot home I see nothing inherently better in either choice.

The decision is theirs and how it works in their life. What makes it good or bad is how well it is working for them. Someone could choose one book over another to keep as a possession. One might say the Bible is better than Moby Dick. Another might say they’re both fiction. Yet a third person might say they are just paper with ink bound together because that person can’t read and they need it for toilet paper.

My point is this: I am not doing any of this to make a judgmental statement about the choices that everyone else makes. It is up to them, and you, to make up minds about what is necessary.

I’ll be the first to admit that being single with no children gives me the opportunity to explore this dramatic shift in a way that many people could not. The choices others have made may have created situations that require them to take consideration of many others in a manner that I don’t have to.

My goal is to let you know how my choices affect me and what it might mean to you as you make choices in the future. I feel lucky to be able to add this exercise as one of the life experiences that I can add to my list of experiences. One day I’ll probably look at  friend and say, “Remember that year I got rid of all my stuff? That was pretty crazy huh?”